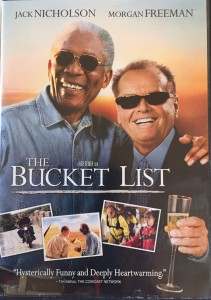 My life doesn’t allow me much time to take in films. If I truly hoped to catch up on all the films I wanted to see, I’d have to go back twenty years. The other night I only went as far back as 2007 to watch The Bucket List starring Morgan Freeman and Jack Nicholson. The film was not overly deep. Two older men from very different backgrounds meet when they become roommates in the hospital. When they are both diagnosed with terminal cancer, they create a bucket list of things they would like to experience before they die. Freeman’s character, Carter, had once dreamed of becoming a history professor, and had just begun college when he found out the woman he was involved with was pregnant. They married, and his dream was quietly set aside. Instead of becoming a history professor, he worked for 40 years as a mechanic while raising three children. He did what was responsible and right, and got on the hamster wheel in order to provide for his family. Now, just as his life was ending, he was given an opportunity to achieve a few dreams. And he felt guilty for even thinking about going for it.

Two days later, I’m still thinking about this film—not because it was a stellar movie—but because it hit a nerve. I don’t know what it is about turning 50 that causes you to pause and reflect on every little bit of your life, but that is what I have been doing. Perhaps it is because I realize that even if I stay healthy and avoid catastrophic accidents, I have fewer years ahead than years behind. Or maybe it’s because my 18-year-old twins will be leaving for college next year and that phase of everyday parenting will end. Or it could be that I am waking up, realizing I bought into the hamster wheel approach to life hook, line, and sinker, and now I am angry and grieving lost years I will never get back.

While I certainly don’t regret marrying my husband and having children, I am resentful that for my generation, jumping through those hoops didn’t really seem to be an option. It wasn’t a matter of if—it was a matter of when. I had no clue at the time that all of these hoops were socially constructed. It was just what everyone did. I stepped onto the work-marriage-motherhood-mortgage-debt treadmill, and haven’t yet found any way to step off. I have worked non-stop for 35 years. I didn’t stop working when I gave birth to twins. I was back at my desk before their original due date, since they were born seven weeks early and I only had six weeks of unpaid family leave. For much of my career I have worked more than one job at a time, while raising more than one child. As a result, I have missed a lot. I have spent more time teaching other people’s children than I have with my own. I haven’t taken many vacations. There has always been work to do and debt to pay.

And that isn’t changing anytime soon. After all, I have two kids starting college. How in the world will we pay for that? Yet even though the hamster wheel keeps spinning, and there are more hoops to jump through, I am beginning my own quiet rebellion. Somewhere deep inside me my soul is begging to be fed, nurtured, cared for, loved. Somewhere deep inside me is a woman who simply wants to be. Right now her voice is a whisper; after all, there is college to pay for. But I know her voice will continue to grow louder, and she will demand to know why I am choosing this existence when there must be healthier, happier ways to live. I need to pause and listen to her. I need to question. I need to find the courage to step off the wheel, or to jump. I need to stop feeling guilty. Who am I trying to impress? I don’t want to wait until I am actively dying to start living.

I often hear people criticize today’s young adults. Why aren’t they taking on more responsibility? Why aren’t they using their degrees, pursuing careers, paying off their loans, buying houses, getting married, having kids? What do you mean they are taking on seasonal work and then taking off on a trip to Costa Rica? Well, maybe they are onto something. Maybe they have looked long and hard at the lives their parents are living, and they have decided that their parents don’t have all the answers. Maybe they will choose different paths. I, for one, hope they realize they have options. I hope I have options, too.