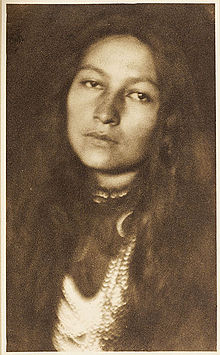 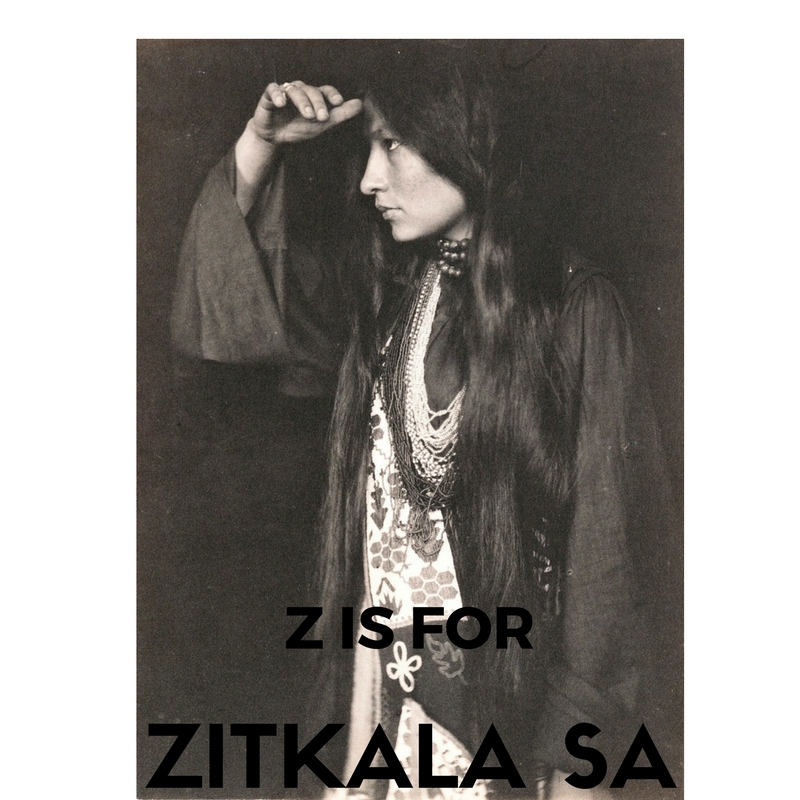 Each week for 26 weeks, I am publishing a post about women who are not widely known but should be—women who can inspire us, teach us, and encourage us to get out of our comfort zones and reach for our dreams. Week 26 of my A to Z challenge introduces us to Zitkala Sa.

For the past six months, I have challenged myself to write a new blog post each week about a woman or group of women that I believe we should know about, but likely do not. As I start my last entry, I can honestly say that while the last 26 weeks have been among the most difficult weeks of my own life, having this one grounding project helped get me through this incredibly tough time. Learning about these women—their struggles, their tenacity, their incredible talent—provided me with the strength I needed, and I am grateful to them. While I don’t believe very many people read the posts, it made me feel good to write them, and to realize that these 26 women are just the tip of the iceberg. There are countless others who deserve recognition they have not received. In fact, I could start all over at the letter A and continue this project every week for the rest of my life, and it would still just be the tip of the iceberg.

Zitkala Sa (Gertrude Simmons) was born in 1876 on the Pine Ridge Reservation in South Dakota, the third child of Ellen Tate Iyohiwin Simmons, a full-blood Dakota Sioux who raised her children in the traditional Indian culture. There is little known about her father, who was white (aktalakota.stjo.org). Zitkala Sa, which translates to Red Bird, was sent to a Quaker Missionary School for Indians in Wabash, Indiana when she was 12. While her mother was reluctant to send her, she also realized that she needed to prepare her daughter to make her own way in a hostile society. Red Bird returned three years later with a newfound ambivalence toward her own heritage: “The assimilationist schooling left her ‘neither a wild Indian, nor a tame one,’ as she later described herself in ‘The School Days of an Indian Girl’” (facstaff.bucknell.edu).

Four years later she returned to school, eventually attending Earlham College in Richmond, Indiana, where she studied to become a teacher before moving to the east coast: “As a student at the Boston Conservatory she went to Paris in 1900 with Carlisle Indian Industrial School (CIIS) as violin soloist for the Paris Exposition. Increasingly, she devoted herself to her people’s cause and to overcoming her own cultural alienation through her fiction, as expressed in her 1901 collection Old Indian Legends: ‘I have tried to transplant the native spirit of these tales–root and all–into the English language, since America in the last few centuries has acquired a new tongue.’ She realized the need to ground political rights in a recovered cultural identity by revitalizing oral traditions” (facstaff.bucknell.edu). She eventually taught at CIIS; however, when she published autobiographical stories in the Atlantic Monthly that were critical of the boarding school experience for Indians, her employer removed her from her teaching duties and reassigned her as a recruiter, which eventually led to a decision to end her service at Carlisle (nativeamericanwriters.com). 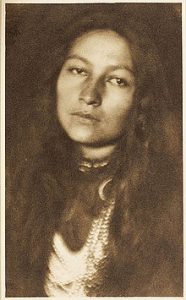 In 1901 she published Old Indian Legends, “the literary counterpart of the oral storytellers of her Sioux tribe…. These legends include stories of Iktomi, the Dakota Trickster, and are traditionally told as entertainment rather than as sacred tales. Zitkala-Sa retells these tales with the intention of reaching a culturally diverse audience of young people” (nativeamericanwriters.com). While she began her writing career with the intention of building a bridge between cultures, as she aged she increasingly took on the role of Indian activist. Unable to obtain a teaching position at the reservation in South Dakota, she accepted a position as an issue clerk at Standing Rock Reservation, where she met her husband, Raymond Talesfase Bonnin, also a Yankton Sioux. The couple transferred to the Uintah and Ouray Reservation near Fort Duchesne, Utah, where they spent the next 14 years, and where their son Raymond O. Bonnin, was born in 1903 (nativeamericanwriters.com).

In 1914 Zitkala-Sa became a member of the advisory board of the Society for the American Indian (SAI), which eventually led to a move to Washington, DC. She became secretary of the organization while her husband served in the army and later clerked at a Washington law firm: “As secretary and as editor of its publication, American Indian Magazine, she aired such controversial issues as enfranchisement, Indian military service in World War I, corruption in the BIA, and allotment of tribal lands” (facstaff.bucknell.edu).

After the SAI disbanded in 1920, she joined the General Federation of Women’s Clubs and founded the Indian Welfare Committee in 1921. She also published her autobiographical stories and other short fiction in American Indian Stories: “In addition to showing the Sioux from the inside, her stories reveal the cruelties that white schooling imposes on Indian children, as well as the feelings of alienation that this education had engendered in her” (nativeamericanwriters.com).

Zitkala Sa remained an activist throughout her life: “Her tireless advocacy of improved education, health care, resource conservation, and cultural preservation led President Hoover to appoint two Indian Rights Association representatives to the BIA. Kaw Indian Congressman Charles Curtis then introduced the Indian Citizenship Bill; after its passage in 1924, he became U.S. Vice President. Zitkala-Sa meanwhile canvassed away the fear of and skepticism toward the vote and tried to persuade her people to use their right of suffrage to vote in Roosevelt. In 1930, she formed the National Council of American Indians and served as president until her death in 1938. A relentless lobbyist, she secured the General Federation of Women’s Clubs’ support which, along with the Indian Rights Association and the Indian Welfare Committee, investigated government tribal treatment and abuse” (facstaff.bucknell.edu).

Z is for Zitkala Sa, writer, advocate, and social reformer.

A Strong Woman’s Voice is Silenced