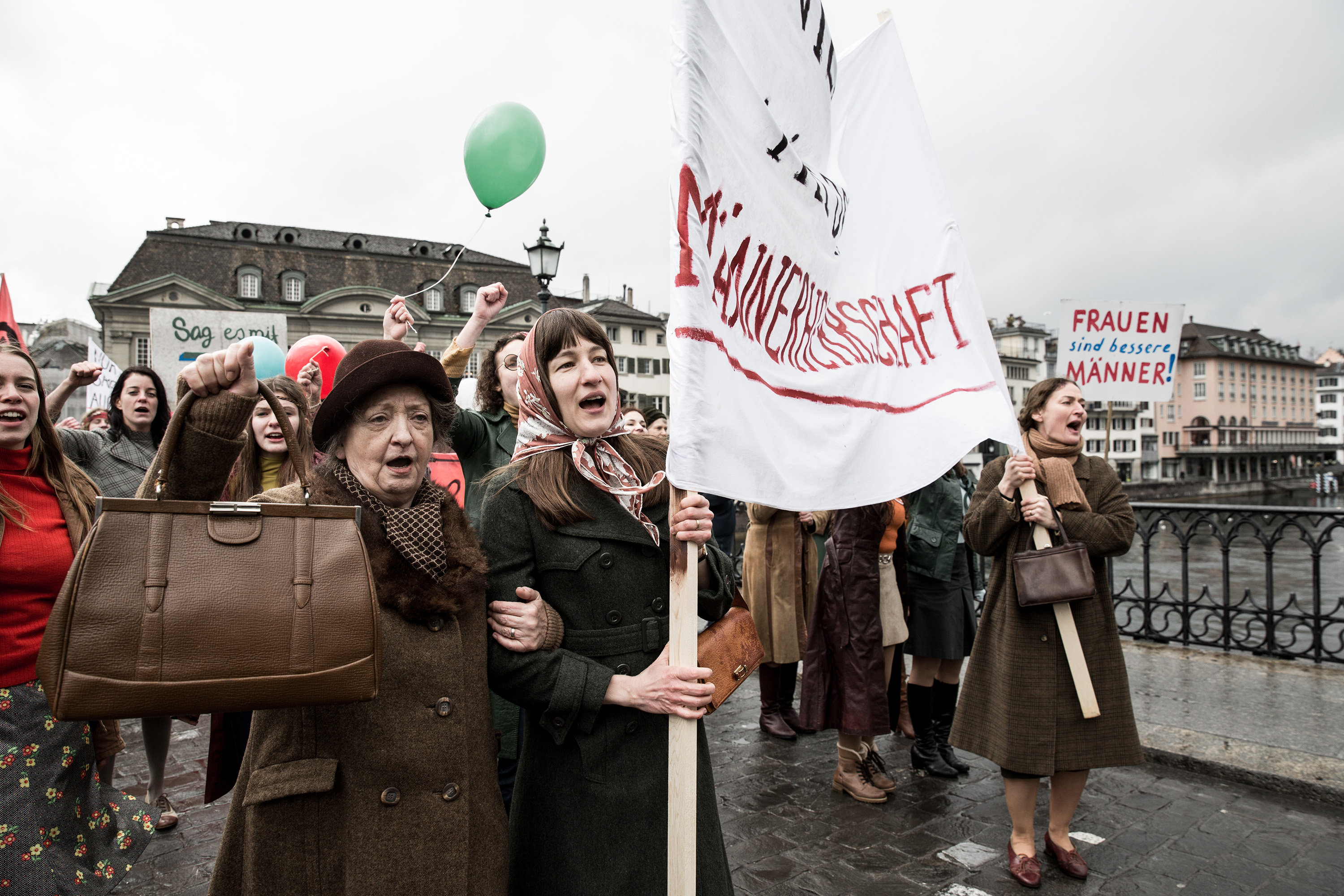 Did you know that women couldn’t vote in Switzerland until 1971? And even then, not all women were included. It wasn’t until 1990 that the conservative region of Appenzell Innerrhoden gave women the right to vote at cantonal level, and it did so only because the federal supreme court forced the issue. While Switzerland wasn’t the last European country to grant women the right to vote (Moldova did so in 1978 and the principality of Leichtenstein finally came around in 1984), it is still shocking to think that the country waited 78 years after New Zealand permitted women to vote in 1893 (The Local ch). 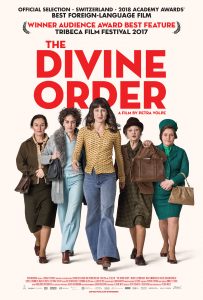 The Divine Order, a 2017 Swiss film directed by Petra Volpe, captures the 1971 battle from a personal standpoint, focusing on one woman, a dutiful wife and mother. Nora lives in a small Swiss village with her husband, Hans, and their two sons, Luki and Max. Nora is a quiet, unassuming woman, dedicated to her family. Yet she is also restless. She spends her days caring for others and ignoring her own needs. When she notices that a local travel agency seeks to fill a part-time position, she tells her husband she would like to apply. He forbids it, thinking it would imply that he could not take care of his family.

Nora begins to examine the lives of the women around her, and as she does so she realizes the depth and breadth of the patriarchy, and she knows she must rebel. Nora’s sister-in-law Therese is a battered wife of a resentful farmer. Nora’s niece, Hanna, is sent to reform school and then prison because she refuses to conform to the socially constructed norms for women. Nora’s friend and mentor, Vroni, loses her restaurant and livelihood after the death of her husband. With the help and support of these women and others, Nora ventures into public activism.

To learn more about the feminist movement, the small group of women travel to Zurich to join a protest march. While there, they are encouraged to attend a workshop that asks them to get to know their own vaginas. And here the personal becomes political, as Nora faces the realization that she has never reached orgasm. Not only is she repressed by socially constructed norms, she is also a stranger to herself and her own sexuality.

When the women return to the village and hold an informative public event advocating for the right to vote, Nora is vilified as she stands up to deliver her speech. She is heckled, and someone in the audience even throws food at her, all while her husband watches in silence before raising his hand to indicate he is against women’s right to vote.

The only thing left to do is strike in an attempt to show the men what their lives would be like without the women who love them. The women gather in the local restaurant Vroni once owned, which is now a pizzeria run by a divorced woman from Italy, Graziella. After a few days, men storm the restaurant and resort to violence to drag their wives out. In the chaos that ensues, Vroni collapses and dies of heart failure.

Defeated, Nora returns home, but soon realizes she cannot go back to the way things were. She attends the job interview and accepts the position at the travel agency, knowing that it could well end her marriage. Hans, who was forced to learn how to cook and care for his sons during the strike, begins to shift his perspective, as do other men in the village. When voting takes place on February 7, 1971, Swiss women are finally given the right to vote—yet not in all cantons. The film ends on a very personal note, as husband and wife come together on equal terms for the first time in their marriage.

The message of the film, and of Switzerland’s bitter battle for equality, is that strict gender roles harm everyone. In 1959, the canton of Vaud allowed women to take part in cantonal elections (but not federal). Between 1959 and 1971, eight more cantons granted women that right. But it wasn’t until 1971, when 65.7% of male voters agreed that women should be allowed to vote in federal elections, “78 years after New Zealand (the 1st), 53 years after Germany, 27 years after France and 26 after Italy. That same day, the four cantons of Aargau, Fribourg, Schaffhausen and Zug fell into line, giving women there the vote at a cantonal level” (le news). Twelve cantons refused, and it wasn’t until April 1991 that all twelve of the holdout cantons granted women the right to vote at cantonal and federal levels (le news). 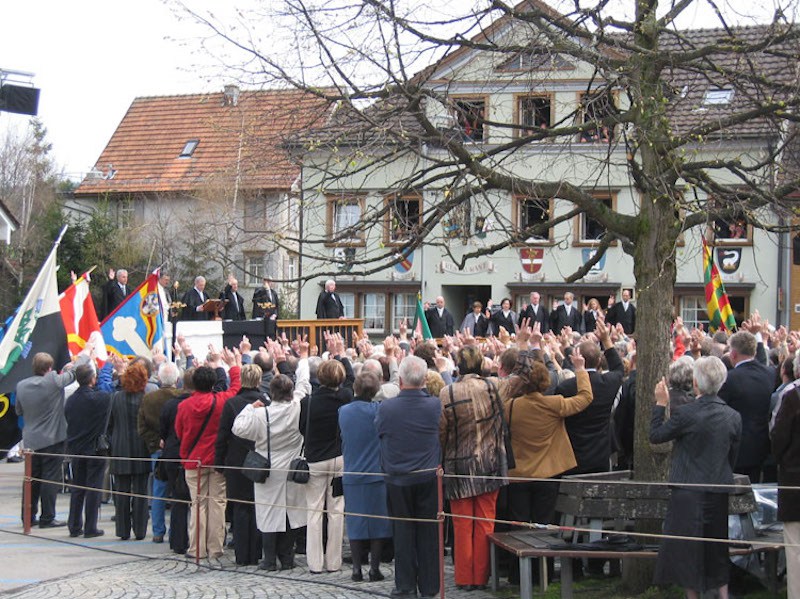 While Switzerland was slow to move toward equality, once the country granted women the right to vote, sweeping change came quickly: “In 1981 gender equality and equal pay for equal work was written into the Swiss constitution. By 2016 Switzerland was ranked in the World Economic Forum’s Gender Gap Report as the 11th most gender equal country in the world and sixth in Europe” (The Local ch). However, women working in the private sector continue to earn significantly less than their male counterparts, an indication that you can’t legislate behavior. In a September 1985 referendum, women were granted equality within family life, meaning men no longer had legal authority over their wives. And in 1999, “Ruth Dreifuss became the first female president of Switzerland…under the rules of the country’s annually rotating presidency” (The Local ch).

Women became legally entitled to paid maternity leave in 2005 (four previous attempts for paid leave had failed). Mothers are now entitled to 14 weeks paid maternity leave at up to 80 percent of their salary to a maximum of 196 francs per day. While this is less than many other European countries, it is much more than the US, which has no mandated paid maternity leave. This year has brought some disappointments and defeats. In January the lower house of the Swiss parliament rejected a move to introduce a female quota for the seven-member federal government, and in February the Council of States rejected a proposal to guarantee equal pay for women and men. Similar to President Obama’s proposal (which has since been put on hold by the Trump administration), this mandate would have required firms with over 50 employees to undergo an audit every four years with information on how much they paid to male and female staff made available to the public and shareholders (The Local ch).

As we approach election day in the US, I am reminded how lucky I am to be able to exercise my right to vote without being questioned or turned away. I am well aware that women in the US have had this right for less than one hundred years. I know the fight for the right to vote was long, arduous, and at times violent. Women suffragettes risked everything—including their lives—so that we could have a say in the laws that govern us. We owe first wave feminists such a debt of gratitude. Each time I vote, I nod in silent appreciation of those who secured this right for me. I will never take it for granted.

O is for Oveta Culp Hobby