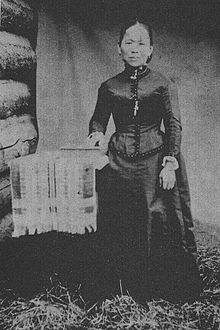 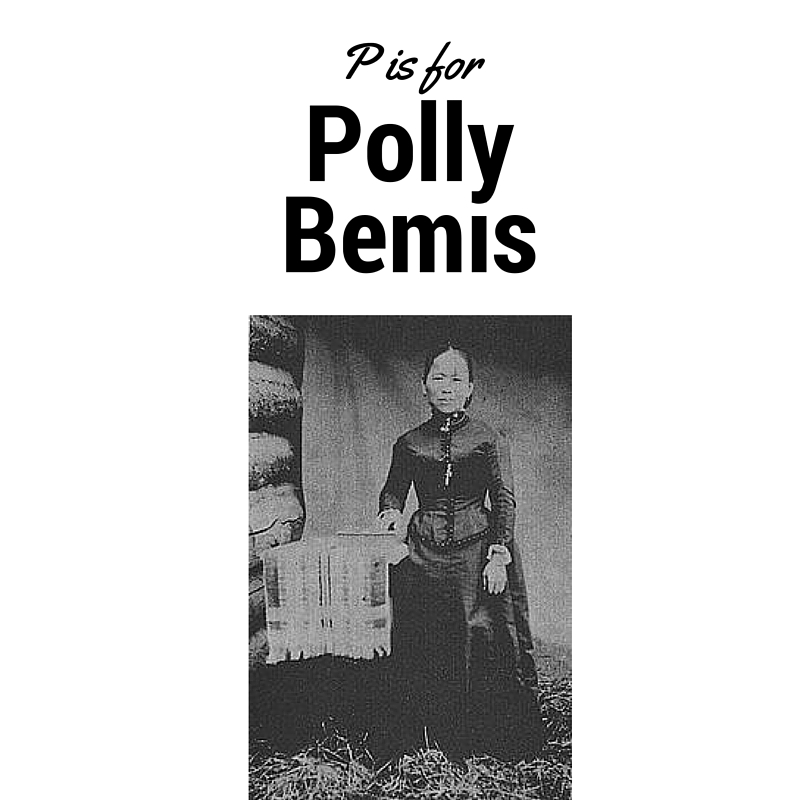 Each week for 26 weeks, I am publishing a post about women who are not widely known but should be—women who can inspire us, teach us, and encourage us to get out of our comfort zones and reach for our dreams. Week 16 of my A to Z challenge introduces us to Polly Bemis.

If you have heard of Polly Bemis at all, it is likely that you remember her from Thousand Pieces of Gold, the 1991 film based upon the book written by Ruthanne Lum McCunn. Yet the film took quite a few liberties, and the complete truth about Polly’s life—particularly her early life in China—is not known, which is why McCunn wrote a biographical novel of her life instead of a straightforward biography: “Instead of a biography, then, I decided to write a biographical novel. That did not mean I was willing to take liberties with the truth. Rather, it meant I threw myself into the kind of intensive research that would, I hoped, help me sort through the disparate facts and fill in the gaps” (McCunn).

Polly really wasn’t Polly at all. She was born Lalu Nathoy on September 11, 1853 in northern China. Her parents were impoverished farmers, and when Lalu was 18, they were forced to sell her to bandits in exchange for seeds to plant crops they hoped would save the rest of their family. She eventually ended up in the US, arriving first in San Francisco. She was then taken to Warrens, Idaho by Hong King, a Chinese man who purchased her before being lured to Idaho by the gold rush. It was in Warrens that she was renamed Polly (McCunn).

It is not clear whether or not she was forced to work as a prostitute. Hong King ran a saloon in Warrens, as did a man named Charlie Bemis, who befriended and did his best to protect Polly from unwanted advances. Eventually, Polly and Bemis became lovers—perhaps after the death of Hong King—although this is not a known fact. There is a popular legend that claims Bemis won Polly in a poker game with King, but many dispute that as pure myth. After becoming involved with Bemis, Polly ran a boardinghouse that he had built near his saloon (McCunn).

Bemis suffered a gunshot wound to the face when a man who lost a poker game to him demanded his money back. The doctor, who had to travel 87 miles by horseback to reach Warrens, was unable to extract the entire bullet because it had fragmented. He believed Bemis would die of infection. But Polly cleaned the wound, perhaps using Chinese herbs given to her by the two Chinese doctors in town, and eventually she located the other half of the bullet in his neck and cut it out using a razor (McCunn).

The two eventually married in 1894 (even though Idaho law prohibited whites from marrying non-whites), perhaps in order to prevent Polly from ever being deported, since she was in the country illegally. Eventually they left Warrens and built a home on the Salmon River, where they grew produce and raised animals: “The couple became renowned for their generous hospitality, but it was Polly’s bright-eyed warmth and humor that people talked about the most. Polly would take in those who were injured or ill and nurse them back to health. As pioneer John Carrey put it, ‘There was nobody in my day who carried the respect Polly earned through her kindness to everybody’” (McCunn).

In 1909 a man named Charlie Shepp purchased a ranch across the river, and befriended Polly and Charlie Bemis. Polly’s husband was bedridden by 1919, and in 1922, when their home caught fire, it was Shepp who helped Polly pull her husband to safety, although they lost their entire ranch. After the fire, they were forced to live with Shepp, and it was there that Charlie Bemis died on October 29, 1922. After her husband’s death Polly returned to Warrens, but she missed the ranch and eventually walked the 17 miles back, where she agreed to give Charlie Shepp her land if he would let her live there. He built a cabin for her, which was completed in 1924. She remained there until she became ill in 1933, although she also traveled during these years, experiencing many firsts such as riding in an auto, viewing a film, taking an elevator, and seeing streetcars and trains (McCunn).

She was forced to move to a nursing home in Grangeville after likely suffering a stroke, and she died on November 6, 1933. Only after McCunn published Thousand Pieces of Gold did she begin receiving additional information about Polly and about Warrens, Idaho during that time period. The most significant fact revealed that Polly had not been Chinese at all, but was actually Mongolian. According to Huang Youfu of the Research Department on Northeastern and Inner Mongolian Nationalities, “In the mid-nineteenth century…many Mongolians, previously nomadic, settled in Han areas to farm. Some of the settlers adopted Han customs, such as foot binding. When living among people who professed Islam, some even gave up the Mongolian Faith, Lamaism, and became followers of Islam, This, Huang speculated, had been the case for Lalu’s family” (McCunn).

Polly’s remains were eventually returned to her land and cabin, which is now a museum that you can visit if you would like to learn more about her: “In 1987 the Department of the Interior deemed the cabin significant in Idaho’s heritage, and at the museum’s dedication ceremonies Governor Cecil Andrus declared, ‘The history of Polly Bemis is a great part of the legacy of central Idaho. She is the foremost pioneer on the rugged Salmon River’” (qtd. in McCunn).

P is for Polly Bemis, a pioneer of incredible strength and spirit.

S is for Susette La Flesche