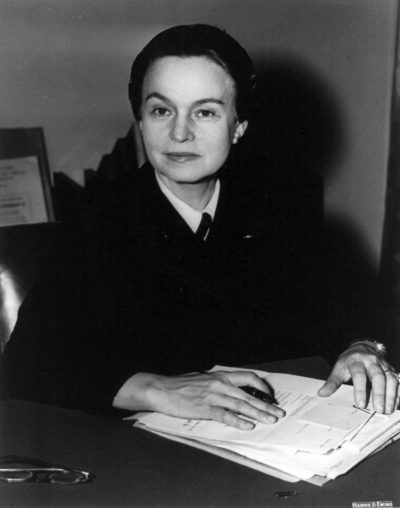 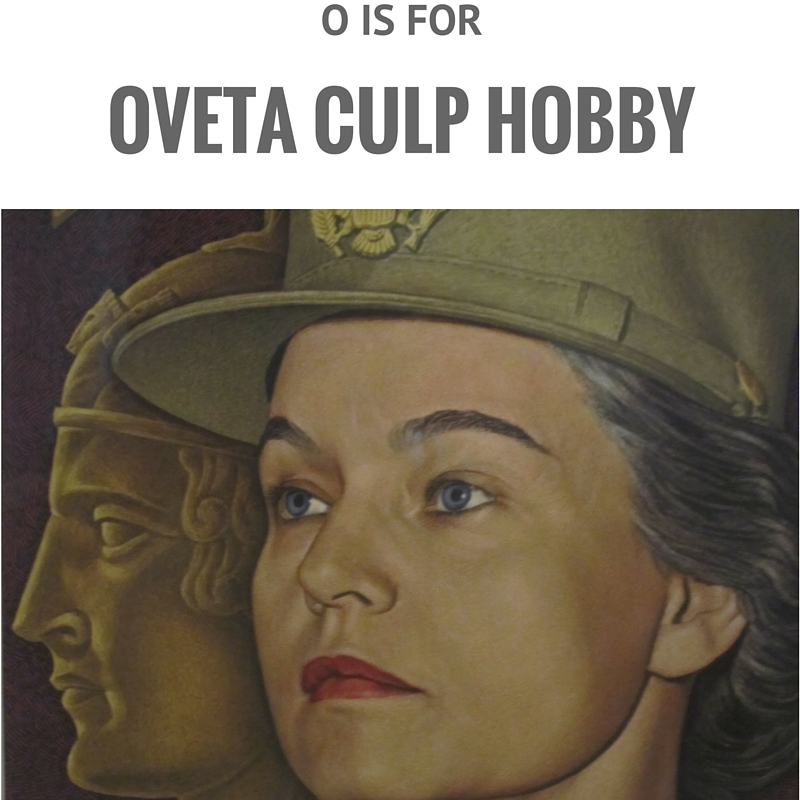 Each week for 26 weeks, I am publishing a post about women who are not widely known but should be—women who can inspire us, teach us, and encourage us to get out of our comfort zones and reach for our dreams. Week 15 of my A to Z challenge introduces us to Oveta Culp Hobby.

“The rule of thumb is a simple one. Regard each man, each woman, as an individual, not as a Catholic, a Protestant, or a Jew; not as an Indian, American, or European. Like or dislike a person for his own intrinsic qualities—not because he belongs to a different race or subscribes to a different religion. Dignify man with individuality.” ~ Oveta Culp Hobby

Perhaps because I teach Women’s Studies, I believe that I should somehow be familiar with every woman of historical significance who ever existed. At the very least I should have learned about important women from my own country. Yet because so many women leaders are not included in our K-12 curriculum—or even in higher education in some cases—I completely missed out on Oveta Culp Hobby.

I could never hope to include all of her accomplishments in a blog post—there are far too many—but I will try to touch upon her major achievements with the hope that you will choose to explore her life in more depth on your own. Believe me, she is worth the time and effort.

Oveta was born in Killeen, Texas, on January 19, 1905, the second child of Ike and Emma Culp. Her father was a lawyer and state legislator. She often went to his office after school to listen to his legal discussions and read the books in his law library. She had read the Congressional Record by age 10, and had read the Bible three times by age 13. Ike was elected to the state legislature when Oveta was 14, and he often took her with him to attend legislative sessions in Austin. Her mother taught her the importance of community service, and when Oveta was just a child she would help her mother deliver baskets of donated goods and money to neighbors experiencing hardship (tshaonline.org; humanitiestexas.org).

After receiving her undergraduate degree, she attended the University of Texas Law School, and by age 19 her own library contained over 750 illustrious volumes. When she was 20 she was asked by the speaker of the Texas House of Representatives to act as legislative parliamentarian, a position she held for six years. She became active in numerous democratic campaigns, and held the position of assistant to the city attorney of Houston. While working there, she became reacquainted with family friend William P. Hobby, the former governor of Texas and current president of the Houston Post-Dispatch. He was a widower, and in 1931 Oveta, who was 26, married the man everyone still referred to as “Governor.” He was 53 (tshaonline.org; humanitiestexas.org).

Oveta worked her way up to executive vice president of the newspaper in 1939, all while raising two children and suffering serious accidents—the first a horseback riding accident that resulted in broken bones, and the second a crash landing when the small plane she and her husband were traveling in from Dallas to Houston caught fire. Nothing slowed her down. She joined numerous charitable and nonprofit causes, including Houston’s Museum of Fine Arts, the Houston Symphony Orchestra, and the Mobilization for Human Needs. After Houston flooded in 1935, she was the only woman selected to develop a flood control plan, and she chaired the Texas advisory group for women’s participation in the 1939 World’s Fair. (humanitiestexas.org).

She was just getting started: “Back at the Post after her daughter, Jessica, was born in 1937, Oveta, now an assistant editor, introduced a series of articles about ‘subjects of international significance’ in their historical contexts, including pieces on the Ottoman Empire, the constitution of Turkey, the pact between England and Egypt, Afghanistan, and the Greek constitution. At about the same time, she served on the Texas State Committee for Human Security, an organization that solicited funds for blind and needy children (humanitiestexas.org). 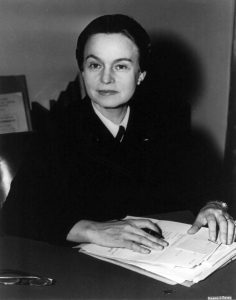 In the 1940s, as US involvement in WWII appeared imminent, Oveta, who together with her husband now owned a radio station, was tasked to head the Women’s Interest Section, War Department Bureau of Public Relations. After the attack on Pearl Harbor, Congress passed a law establishing a Women’s Army Auxiliary Corps (WAAC), led, of course, by Oveta Culp Hobby: “Along the way, she learned quite a bit about the subtle—and not so subtle—ways in which women were discriminated against….The comptroller general claimed that WAAC doctors couldn’t be paid because they weren’t, strictly speaking, in military service, so Secretary Stimson had to ask Congress to pass special legislation authorizing salaries for them. Despite the fact that in the army even NCOs had a jeep at their personal disposal, when the director of the WAAC needed a car, she had to request one from the motor pool” (humanitiestexas.org).

Under Oveta’s leadership, the original 54 tasks that women were permitted to do quickly grew to 239, and within two years there were over 600,000 requests for WAACs from around the world. The name of the group was changed to Women’s Army Corps (WAC) in 1942: “Ultimately, WACs were posted in Europe, the South Pacific, and the China-India-Burma theater. Everywhere they went, they served with distinction, despite the continuing discrimination against them. Sometimes the inequities were simply insulting—as when WACs in the South Pacific were restricted to barbed-wire compounds except when they were working, and had to be accompanied by armed guards on their way to and from work. Others, however, posed serious risks; for example, women were much more likely than men to catch malaria, because they were not issued the sorts of lightweight protective clothing the men were.” By the time the war ended, Oveta had the distinction of being the first woman to wear the uniform of a U.S. Army officer. She was also a recipient of the Distinguished Service Medal, the nation’s highest noncombat award (humanitiestexas.org).

Oveta was an early proponent of the United Nations, and, having met Dwight Eisenhower at the end of WWII, chose to back his bid for the presidency. After he was elected, he selected Oveta to chair the Federal Security Agency, which was later renamed the Department of Health, Education, and Welfare in 1953. In the two and a half years that she led the agency, “she oversaw the introduction of the Salk polio vaccine, a major expansion of the federal hospital and health-care infrastructure, an emergency plan to build new schools to meet the demand created by the postwar baby boom, the development of new forms of medical insurance, and a spurt in the number of people covered by Social Security” (humanitiestexas.org).

She resigned her position when her husband became ill, and took on the role of president and editor of the Post. She also accepted the challenges of chairman of the board of directors of the Bank of Texas, first female trustee of Mutual of New York, and member of the board of trustees of Rice University. Oveta died in 1995 after suffering a stroke; she was 90.

There are numerous quotations etched into the stone of the WWII Memorial in Washington, DC—all from the political and military leaders of the time. There is only one quote from a woman, and that woman is Oveta Culp Hobby: “Women who stepped up were measured as citizens of the nation, not as women. This was a people’s war and everyone was in it”(humanitiestexas.org).

O is for Oveta Culp Hobby, journalist, military officer, philanthropist, and Secretary of the Department of Health, Education, and Welfare.

P is for Polly Bemis