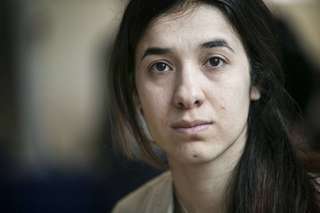 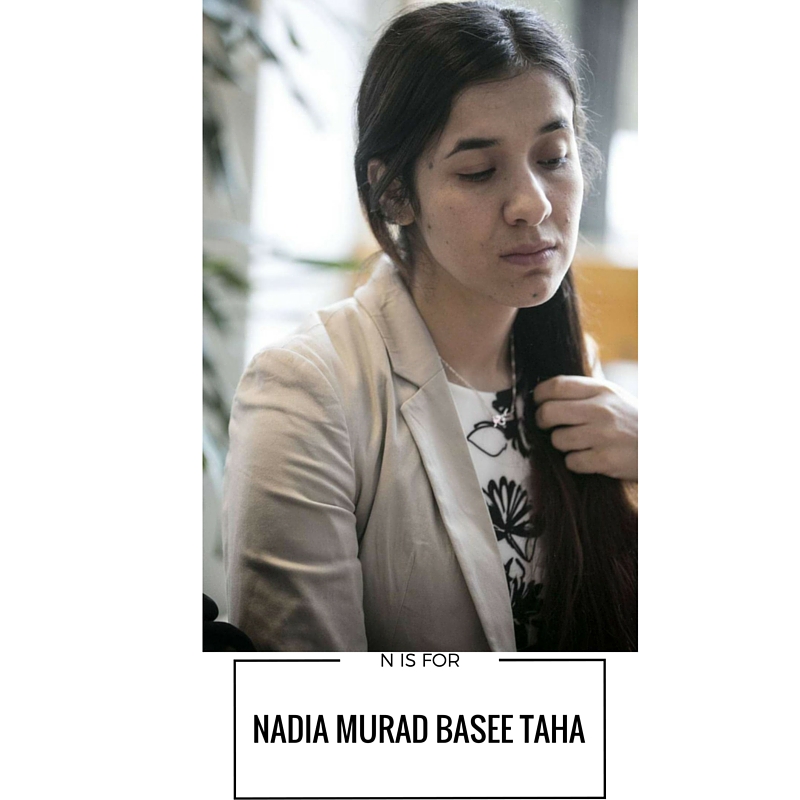 Each week for 26 weeks, I am publishing a post about women who are not widely known but should be—women who can inspire us, teach us, and encourage us to get out of our comfort zones and reach for our dreams. Week 14 of my A to Z challenge introduces us to Nadia Murad Basee Taha.

Nadia is a member of the ethnic Yazidi group, which until recently consisted of 600,000 people whose communities included Sinjar, Nineveh, and Dohuk Province. In 2014, members of the Islamic State invaded Sinjar. Many residents were killed, and those who could escape fled to Mt. Sinjar, where they became trapped for days without food or water. Many more died before they could be evacuated. Thus began a targeted genocide against the Yazidi people, who are considered “kafir” or “nonbelievers” since they do not practice Islam (nadia-murad.com).

Nadia was living with her family in Kocho when members of the Islamic State attacked her community: “The Islamic State came with the sole aim of destroying the Yazidi identity through force, rape, recruitment of children and destruction of all of our temples, which they took control of. All of this can be interpreted only as an act of genocide against our identity, in particular against Yazidi women. Rape was used to destroy women and girls and to ensure that they could never again lead a normal life” (nadia-murad.com). When ISIS attacked, they separated the men from the women. They killed hundreds of men, including six of Nadia’s brothers (Time.com).

Nadia was taken, along with other young women, to Mosul, where she was given to an ISIS fighter: “He forced me to serve in his military company. He humiliated me daily. He forced me to wear clothes that barely covered my body. I was not able to take any more rape and torture. I decided to flee, but one of the guards stopped me. That night he beat me. He asked me to take my clothes off. He put me in a room with guards, who proceeded to commit their crime until I fainted” (nadia-murad.com).

Those who refused to become Muslim were killed. Many times, even those who converted were killed as well: “And even men who agreed to become Muslims out of fear for their lives were killed, their women enslaved and their children recruited. Sixteen mass graves have been discovered so far. One of them contains the remains of 80 women—including my mother—whom they did not desire and so decided to kill” (nadia-murad.com).

Nadia finally escaped when one of her captors left the door unlocked. She was eventually transported to a refugee camp, and ultimately made her way to Germany with other refugees. In December of 2015 she traveled to the US with the help of Yazda, a US based nonprofit dedicated to supporting Yazidi survivors, to speak at the UN Security Council’s first session on human trafficking (Time.com).

This young woman was courageous enough to share her painful story in order to bring attention to Yazidi genocide. She spoke on behalf of all who have suffered when she demanded the release of thousands of women and children still being held. She also demanded that the atrocities be recognized as genocide. She requested that Yazidi villages be liberated so that those remaining could return to bury their dead, and she asked that member countries open their borders to Yazidi victims. Finally, she asked the Council to destroy the Islamic State before they inflicted even more pain and suffering: “All those who commit the crimes of human trafficking and genocide must be brought to justice so that women and children can live in peace—in Iraq, Syria, Nigeria, Somalia and everywhere else in the world. These crimes against women and their freedom must be brought to an end today” (nadia-murad.com).

S is for Susette La Flesche