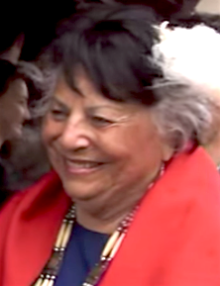 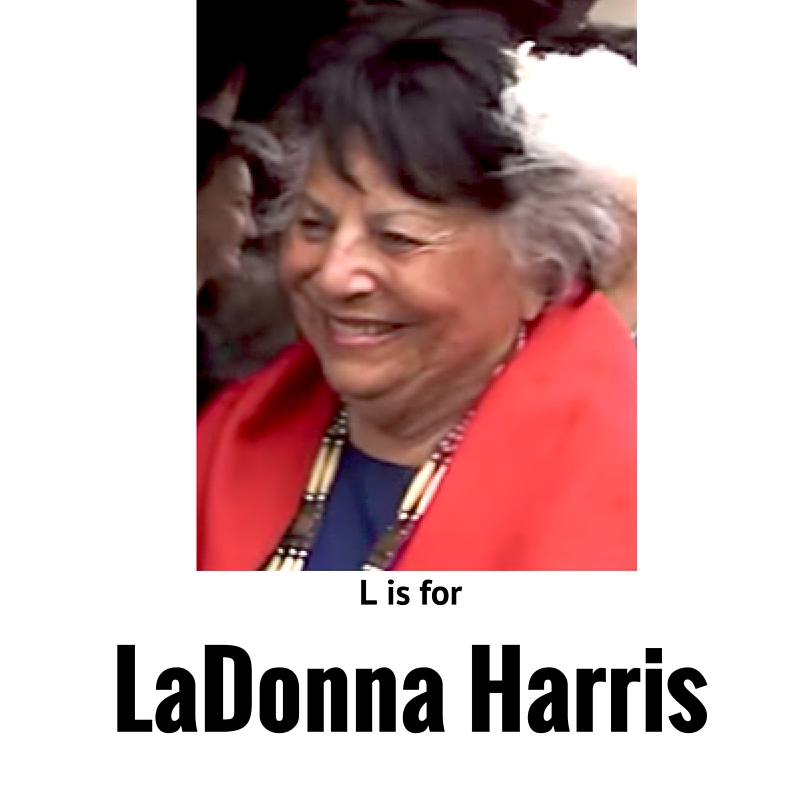 Each week for 26 weeks, I am publishing a post about women who are not widely known but should be—women who can inspire us, teach us, and encourage us to get out of our comfort zones and reach for our dreams. Week 12 of my A to Z challenge introduces us to LaDonna Harris.

If we are related to all things, we have responsibility to each other, to our family, to our community … to the world. ~LaDonna Harris

When I think of women who have dedicated their lives to a cause and worked tirelessly as advocates, LaDonna Harris is one of the first to come to mind. And yet, if I mention her in conversation, most people shake their heads and ask, “who?” Even among Native activists, she is not as well known as men like Dennis Banks, Russell Means, and Leonard Peltier, or other women like Wilma Mankiller and Ada Deer. But perhaps that is because she has been a different kind of activist and leader: “Her name is not as well known as others because she does not fit neatly within the Western conceptualization of leadership, which tends to privilege one person in a hierarchical position of power….Harris cannot be associated with only one job or position, however. She has never held an elected or government-appointed office, tribal or federal. Yet, Harris’s work has easily been as important as the work of her peers….Her accomplishments are less about what she did…than about what she created” (Cobb).

Born LaDonna Vita Tabbytite in Temple, Oklahoma in 1931, she was the daughter of Donald Crawford and Lily Tabbytite, a Comanche. Her parents separated shortly after her birth, and LaDonna was raised by her maternal grandparents, Wick-kie and John Tabbytite, who taught her the values of Comanche culture: “Perhaps one of the most important elements of Comanche culture for me is our system of kinship—we understand our own identities through our families and clans and the particular responsibility that comes with each relationship….For Comanches, a child is brought up by the entire extended family, as well as the larger community…we learn our way to contribute through our relationships to family members” (qtd. in Cobb).

She first learned English in public school, and that was where she met her future husband, Fred Harris. They married shortly after graduation in 1949. Fred attended law school before being elected to the Oklahoma Senate (okhistory.org) It was then that LaDonna’s advocacy work began. After she was rejected from the Junior League of Oklahoma due to her ethnicity, she turned to political and social activism in order to fight for Indian rights (pbs.org).

After Fred was elected to the US Senate in 1964, it didn’t take President Johnson long to notice the work being done by LaDonna. She was one of the first senate wives to testify before Congress, and Johnson soon assigned her to educate the executive and legislative branches of the US government on the unique role of American Indian tribes in a course titled Indian 101 (Albuquerque Journal): “Oklahomans for Indian Opportunity, Americans for Indian Opportunity, the Council of Energy Resource Tribes, the National Indian Business Association, the establishment of numerous ‘Indian desks’ in federal agencies—all of these very real physical spaces and more can be traced to the work and influence of LaDonna Harris. But unlike many leaders, she created these spaces with sustainability in mind rather than personal control, making sure that they would be left in place for others to continue” (Cobb).

She worked to return land to the Taos Pueblo tribe of New Mexico, as well as to many Alaskan tribes. She helped create the National Women’s Political Caucus and the National Urban Coalition, and assisted the Menominee Tribe in their quest to gain federal recognition. She even ran for Vice President in 1980 as a member of the environmentalist Citizens Party ticket. And her work is far from done. She recently created a young ambassadors program, a program she is excited to promote: “we work with people ages 25-35 and impart to them the knowledge of tribal values, incorporating that ideology into contemporary society. Our program has a global view because we think the whole world needs an infusion of traditional values. Young Indian people are taking on responsibility—like we did in the 60s—to build a network of support they can connect with and call on in a global effort to improve the lives of all indigenous peoples” (qtd. in Indian Country Today Media Network).

LaDonna’s dedication to Indian rights has been far reaching: “she created new networks and relationships, new social spaces for Native issues and Native people and new words, ideas, and philosophies” (Cobb). With her ambassador program, she is ensuring that those coming up behind her will continue to improve the lives of all indigenous people. When asked why she has continued to be so passionate about her work well into her eighties, she replied, “Because people still don’t get it. There is still a need for education. It’s part of American history, but people don’t know it. Internationally we wouldn’t be in the trouble we are in places like Afghanistan, if they understood us. We’re all tribal people. We are all the same. If [leaders] had an understanding of how we function as tribal people at home, they could understand the world better” (qtd. in Albuquerque Journal).

To learn more, check out the documentary LaDonna Harris: Indian 101.

House finally votes to reauthorize the Violence Against Women Act

#iamsubject project – My Natural Self – Reclaimed