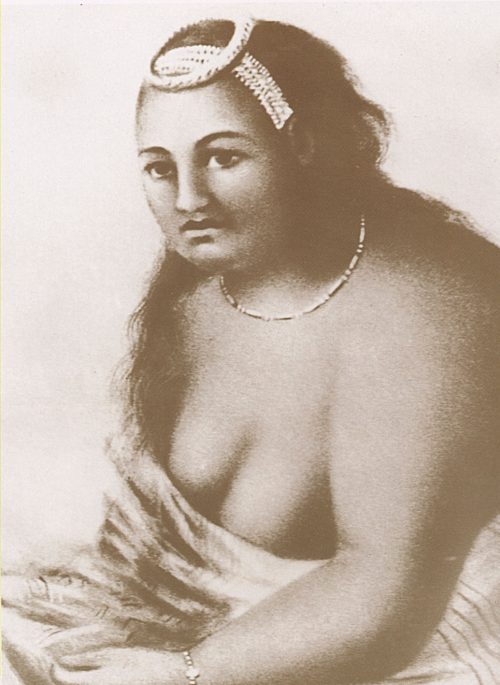 Each week for 26 weeks, I am publishing a post about women who are not widely known but should be—women who can inspire us, teach us, and encourage us to get out of our comfort zones and reach for our dreams. Week 11 of my A to Z challenge introduces us to Ka’ahumanu.

I have always wanted to visit Hawaii; it is on my bucket list. I have yet to make it there, but I know it has a fascinating history. Part of that history includes a bold and inventive woman, Queen Ka’ahumanu.

While Ka’ahumanu is best remembered as the favorite wife of King Kamehameha, she should be recognized for changing the status of women in Hawaii. Different sources place her birth between 1772-1777. Regardless of which date is correct, it is known that she was wed to the first King of the Hawaiian Islands when he was 30 and she was still a girl, perhaps around 13. Over the years he would become husband to many wives, but because of her intelligence, athleticism, and ambition, she remained his closest confidante: “She is all things, and she is undefeatable. Strong in time of crisis, she can also ride the waves like a bird. And she is as lovely as a lauhala blossom” (holoholo.org).

During Ka’ahumanu’s lifetime, the Hawaiian Islands were governed by the Kapu system of law, which placed severe limits on women’s freedom: “Women were considered less pleasing to the gods and were forbidden certain foods such as bananas and red meat or pig. They could not eat with their men [and were not] allowed to fish in salt water or touch the nets. Menstruating women were not allowed to sleep in the same house with their husbands, and during certain kapu days of the year were not allowed in the canoes. This helps to explain some romanticized accounts of Hawaiian maidens swimming out to meet ships. They might have done so because they wanted to, but also possibly because they were not allowed [in canoes] at that particular time” (holoholo.org). The penalty of violating these laws was usually death (holoholo.org).

Following her husband’s death, Ka’ahumanu became kuhina nui (premier) to his successor, Liholiho Kamehameha II: “After the King’s death, she dressed herself in his warrior’s cloak and picked up his spear. Such an act was audacious, because the feather cloak and helmet was reserved for chiefs and warriors, but no one challenged her. Wearing the cloak, she waited for Liholiho, heir to the thrown and soon to be crowned King Kamehameha II. She confronted him and said ‘Hear me, O Divine one…’ and told him it was the dead king’s wish that they both rule together. Liholiho and his royal retainers then accepted her as Kuhina Nui (holoholo.org).

In her new position she initiated many reforms, particularly in regard to women’s role within society. She began by tackling the law that men and women could not eat together. Legend tells that during a banquet, Ka’ahumanu rose from the women’s table and joined Liholiho at the men’s table. She then began to eat. Everyone looked on in shock, expecting the gods to punish this violation. But when neither Ka’ahumanu nor Liholiho were struck down by the gods for committing this offense, the kapu system was abolished, and women were granted new freedoms: “The kahuna were chased away, the heiau were destroyed, and the Hawaiian people engaged in the very acts that had been kapu for hundreds of years. Ka’ahumanu had unraveled the very fabric of Hawaiian religion and society with the pull of a single thread” (holoholo.org).

After the arrival of Christian missionaries in 1820, Ka’ahumanu turned to Christianity, and also learned to read and write. She passed a number of laws prohibiting, murder, theft, fighting, and Sabbath-breaking (hanahou.com). She also remarried more than once for political reasons in an attempt to ensure the future of the Kamehameha dynasty. In her later years, “Ka’ahumanu sensed that the future of her people lay in the ways of the missionaries rather than that of the traders. She was baptized ‘Elizabeth’ before her death in Manoa Valley on June 5, 1832, but by then, four of every 10 Hawaiians were learning to read from Christian text books in their own language. It was with her rule that Hawaiians found themselves on a new path” (holoholo.org).