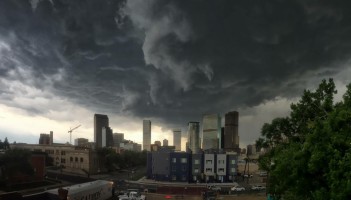 Last Wednesday, my daughter and I left for Denver at 4:15 pm, intending to beat rush hour traffic and enjoy dinner before hearing Malala Yousafzai speak at the Bellco Theater as part of the Unique Lives and Experiences program. We had been looking forward to this evening for months, and were as excited as we had been when we had seen Gloria Steinem together two years earlier. What we didn’t know was that we were driving toward Denver at the exact moment that a monster storm was converging on the city. My skin began to tingle, and I remarked, “Why can’t we see Denver?” Was it a bad ozone day giving the sky its eerie yellow tint?

My question was soon answered by the warning system blaring through the radio speakers. Moments later, our phones lit up with emergency texts. A tornado warning had been issued; one had been spotted on the ground. We should seek shelter immediately: “Mobile homes will be damaged or destroyed. Flying debris will cause injury or death…”. Yet here we were, stuck in traffic in what later would be identified as an EF1 tornado. We watched to see if other people would run from their vehicles. The rain was torrential, pelting the car in sheets. Leaves, branches, garbage, and anything not secured to the ground swirled around us. We even saw a young man ride by on a bicycle, and for a moment the bicycle scene from the Wizard of Oz passed through my mind and I expected him to go airborne. What seemed an eternity passed, although it was likely five minutes, as we crawled through the rain and traffic to the Convention Center and the relative safety of the parking garage (although as we drove up the circular maze, water cascaded down around us as if we were attempting to climb a water slide). When we finally pulled into a parking space and I loosened my white-knuckle grip on the steering wheel, we let out a collective breath and hoped the real excitement of the evening—Malala’s speech—had not been cancelled. 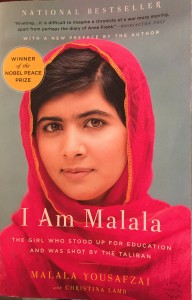 She started late to allow time for all of those stuck in the horrendous storm to arrive. When she walked onto the stage, I was struck by two things: first, how tiny she was, and second, how all of the stress immediately drained from my body, replaced by an overwhelming sense of peace and love.

In the two hours that she spoke, she covered many significant issues. I would like to share just a few that had a particularly strong impact on me. Malala spent one day and night in Denver. What she chose to do with that time amazed me. It is important to remember that she is still so young. She was shot in the head when she was just 15. She is now 17, still in secondary school. On the day that she spent in Denver, she chose to visit a women’s correctional facility, where a book club had recently started. The women had chosen I Am Malala as their first book, and June 24th was their first book club meeting. As they sat holding their books, ready to begin their discussion, they were taken by complete surprise when Malala herself walked into the room. They cried. They were so grateful. She had chosen them. When asked why she wanted to spend time with the inmates, she replied that she believed in the power of forgiveness, and that people should not be condemned for mistakes they had made in the past. If we believe in people, and support them, we can help them toward a better path.

Malala does not hold any hatred or resentment toward the Taliban or the man who shot her and her friends. A hint of a smile crosses her lips as she says that while their intention may have been to silence her, they have instead helped her to create an international movement that has become so much bigger and stronger than she could have ever imagined. They did that. Instead of killing a child, the terrorists helped birth a movement filled with love and support. They helped create the Malala Fund, which has increased awareness and led to action and advocacy on behalf of girls and women all over the world. Instead of silencing one small girl, they awakened a worldwide community. Malala’s experience reminds us of what we often forget–that there is so much more good in the world than there is bad.

Malala stressed that she cannot enact change on her own. She talked about the many girls and women she has visited around the world who are hoping to enact change in their own communities and countries, including Nigeria’s Amina Yusuf, Pakistan’s Kainat Soomro, school friends Shazia Ramzan and Kainat Riaz, and Syria’s Mezon Almellehan, all of whom are now advocating for girls and women around the world. One of the most important takeaways from Malala’s talk is that it will take everyone’s voice to make change happen. We all need to care, to speak out, and to take action.

So much responsibility has been placed on the shoulders of this slightly built girl. Yet I have no doubt that she, of all people, will make the most of this “second life” she has been given. I also hope she embraces every opportunity to be a “normal girl,” one who argues with her brothers and is trying to overcome her fear of roller coasters (while a terrorist could not kill her, she was quite sure that Splash Mountain would be her demise). And I hope one day she can return to her beloved Swat Valley without the fear that she will be killed for going home.

One of the last questions she was asked was what country she would eventually like to live in, if going home to Pakistan was never an option. She lifted her face and looked directly into the audience as she replied, “I would like to live in a country that does not have guns.”

If you find such a place, Malala, I hope you will take me with you.