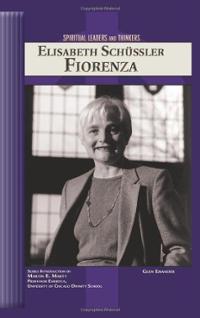 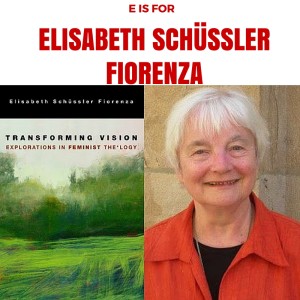 Each week for 26 weeks, I am publishing a post about women who are not widely known but should be—women who can inspire us, teach us, and encourage us to get out of our comfort zones and reach for our dreams. Week 5 of my A to Z challenge introduces us to Elisabeth Schüssler Fiorenza.

I was baptized into the Catholic religion as a baby. Back when my parents married in the 1950s, my mother, who was Methodist, had to sign an agreement promising to raise her children in my father’s Catholic religion before the couple was permitted to marry in the church. She kept her promise. I wish she hadn’t.

I struggled through my First Communion and Confirmation before walking away from the church for the first time in my mid-teens. I would try to return a few times—in college, when I about to give birth—but each time the church seemed to go out of its way to send me the message that I wasn’t good enough, that simply because I was a woman I was somehow “less than.” I walked away for good in my early thirties, and my views regarding organized religion have certainly continued to evolve since then. I hadn’t heard of Elisabeth Schüssler Fiorenza at that time, nor had I been exposed to any of her work. While it would not have changed my mind about leaving the church, her work would have provided me with a different perspective—a feminist perspective—that might have awakened in me an academic curiosity to explore the roots of Christianity further.

Elisabeth was born in Romania in 1938 and fled with her family to what would become West Germany during World War II. She was the first woman to enroll in the theological course required for priesthood at the University of Würzburg, and her 1964 thesis was published as her first book, The Forgotten Partner: Foundations, Facts and Possibilities of the Professional Ministry of Women in the Church. She earned her Masters of Divinity from the University of Würzburg and her doctorate from the University of Münster. She has served for many years as the Krister Sendahl Professor of Divinity at Harvard Divinity School. She is also the cofounder of the Journal of Feminist Studies in Religion, and has served with the Women’s Ordination Conference, Sisters against Sexism, Feminist Theological Institute, Women Scholars in Religion, Women in Theology, and Women Moving Church (cbmw.org). 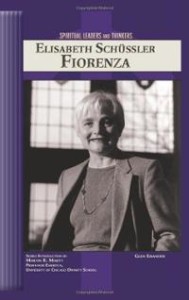 In her studies, Elisabeth became interested in reformist feminist theology (differing from radical feminist scholars like Daphne Hampson), seeking to reform Christian tradition from within rather than rejecting it outright. In her most influential work, In Memory of Her, she seeks “to reconstruct early Christian history as women’s history in order not only to restore women’s stories to early Christian history but also to reclaim this history as the history of women and men” (cbmw.org).

Taking her cue from Elizabeth Cady Stanton and The Woman’s Bible she “affirms that biblical interpretation is a political act, and she espouses a liberation theology model of biblical interpretation…. a feminist reconstitution of the world requires a feminist hermeneutic that shares in the critical methods and impulses of historical scholarship on the one hand and in the theological goals of liberation theologies on the other hand” (cbmw.org).

While her belief that Jesus created a discipleship of equals has come under increasing criticism in recent years, we can’t dismiss the impact her work has had. She came of age during a time when feminist theology as a discipline did not exist; she helped create it. She began studying and publishing in the 1960s, a time that was ripe for women’s voices to emerge. She worked to recover, rename, and reimagine women’s role in the history of Christianity. She sought to redefine women’s experiences—to take them seriously—to recover and reimagine women’s voices and feminine images within the Bible and biblical history (Finch). I applaud her efforts, and the efforts of others, to explore, examine, and question the manner in which women have been portrayed in Christianity. Elisabeth helped start an important conversation—one we are still engaged in today—and I am grateful for her contributions.

E is for Elisabeth Schüssler Fiorenza, who had the courage and strength to tackle the patriarchy within Christianity.

Finch, Candice Celene. A Way That Seems Right to Woman: A Critical Analysis of the Role of Elisabeth Schüssler Riorenza in the Development of Reformist Feminist Theology. Diss. Southwestern Baptist Thological Seminary. Dec. 2014. Web. 6 May 2016.

#iamsubject project – The Glorious Gift of the Unexpected