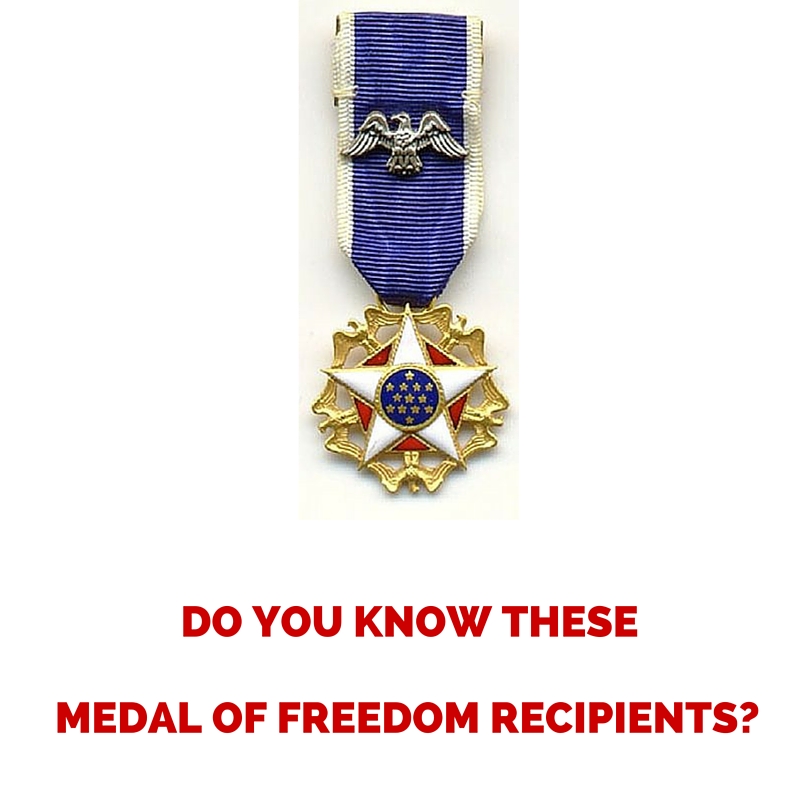 I have to admit that I was somewhat disappointed with this year’s Medal of Freedom recipients. Only six of the 17 recipients were women, and a large number of recipients were entertainers and athletes, some of whom were strong supporters of Barack Obama’s bid for the presidency. The Medal of Freedom is the highest civilian award given in the United States. President Truman established the medal in 1945 to recognize notable service in the war, and in 1963 President Kennedy reintroduced it as an honor for distinguished civilian service in peacetime.

However, despite my misgivings regarding the overall list, I was thrilled to see the president honor the lifelong service of Bonnie Carroll, Shirley Chisholm, Katherine G. Johnson, and Barbara Mikulski.

Bonnie Carroll is the founder of the Tragedy Assistance Program for Survivors (TAPS), an organization she created after the death of her husband, Brigadier General Tom Charles Carroll. TAPS provides compassionate care, casework assistance, and emotional support for those who have experienced the death of a loved one in the armed forces. To date, TAPS has served over 50,000 surviving family members, casualty officers, and caregivers. Carroll is a military veteran herself, having served in Baghdad as Deputy Senior Advisor for Programs in the Ministry of Communications. In this role she oversaw the reconstruction of the telecommunications systems, the modernization of the postal service, and the creation of the Iraq Communications and Media Commission. She is making a tremendous difference in the lives of so many who are often overlooked for the sacrifice their families have made.

Shirley Chisholm became the first African-American elected to Congress in 1968, where she worked on the Education and Labor Committee and helped form the Black Caucus. In 1972, she once again made history by becoming the first black woman of a major party to run for a presidential nomination. She served a total of seven terms in the House before accepting a teaching position at Mount Holyoke College. During her tenure in Congress, Chisholm served on the Veterans’ Affairs Committee and the Education and Labor Committee (only after demanding reassignment from the House Forestry Committee). Chisholm paved the way for women to serve in public office at the federal level, and I am eternally grateful for her efforts.

I am betting that Katherine G. Johnson is not a household name, yet she is a woman we should definitely be holding up as a role model for girls wanting to enter STEM fields of study. In 1953, Johnson was hired by Langley Research Center (LaRC) as a research mathematician for the National Advisory Committee for Aeronautics (NACA), where she joined the all-male flight research division. Her intelligence and assertiveness earned her a place at the table in previously all-male meetings. NACA became NASA in 1958, and Johnson joined the Spacecraft Controls Branch. She was the person to calculate the flight trajectory for Alan Shepard, the first American to go into space in 1959. She also verified the mathematics behind John Glenn’s orbit around the Earth in 1962, and she calculated the flight trajectory for Apollo 11’s flight to the moon in 1969.

Barbara Mikulski started her career as a social worker in Baltimore where she worked with at-risk children and helped to educate seniors about Medicare. Social work led to community activism, and she served on the Baltimore City Council for five years before running for Congress in 1976. She served ten years as a representative for Maryland’s 3rd district before running for a seat in the Senate in 1986. Mikulski became the first female Democratic Senator elected in her own right. She was re–elected with large majorities in 1992, 1998, 2004 and 2010. She serves as a mentor for other women elected to Congress, and she is now the longest serving woman in the history of the US Congress. In 2012 she became the first woman to chair the Senate Appropriations Committee. She continues to fight for seniors, veterans, children, and women, and she will leave a gaping hole in Congress that will be difficult to fill when she retires after her current term.

All of these women have been amazing trailblazers in their respective fields, yet I wonder, are their accomplishments being taught in the K-12 curriculum? Are girls today learning about these women and what they have achieved? Girls can’t be what they can’t see, and they need to see role models like these in order to know and believe that they, too, can become officers in the military, key players for NASA, and influential members of the US Congress. They, too, can become Medal of Freedom recipients.

Y is for Yoshiko Uchida