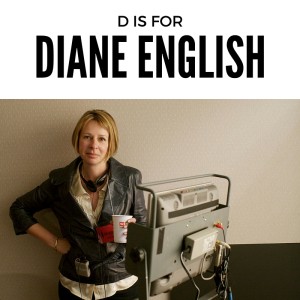 Each week for 26 weeks, I am publishing a post about women who are not widely known but should be—women who can inspire us, teach us, and encourage us to get out of our comfort zones and reach for our dreams. Week 4 of my A to Z challenge introduces us to Diane English.

If you are my age or older, you likely know who Diane English is; however, if you’re younger, you may not. In the 1980s, Diane English dared to ‘get real’ in her creation of female characters for the small screen, which was shocking for young women like me.  After coming of age with the objectified women on shows like Charlie’s Angels and Three’s Company, I welcomed Murphy Brown with open arms.

Murphy Brown was not Diane’s first foray into television. Born in 1948 in Buffalo, New York, Diane was the daughter of Robert English, an electrical engineer, and Anne English, a bookkeeper and former singer. Diane graduated from Buffalo State College in 1970, and in 1971 she threw her belongings into a truck and headed to New York City to find work as a playwright. Instead she ended up as a secretary for the PBS station WNET, where she spent the next decade earning promotions all the way up to Associate Director of the station’s experimental division. She received her first writer’s credit in 1980 for the made-for-TV movie The Lathe of Heaven, which earned her a Writer’s Guild of America Award nomination (makers.com).

After a move to Los Angeles, she hit her stride, writing and producing Foley Square and My Sister Sam before finally creating the pilot for Murphy Brown in 1988. When she first pitched the show, she had already written the pilot, which focused on a 40-year-old woman just coming out of alcohol rehab. The network asked her if she could make two changes: instead of rehab, they wanted the woman to be coming back from a medical spa after suffering from exhaustion, and they wanted this woman to be 30, not 40. In an ironic twist of fate, before Diane could make any changes, the Writers Guild of America strike hit, and the network was forced to accept the pilot as it was or not at all. The groundbreaking Murphy Brown aired to both critical and popular acclaim, and ran for ten seasons, from 1988-1998 (makers.com).

As a young woman, it was refreshing for me to see a female character portrayed as subject, not object. Murphy had aged out of society’s beauty ideal, so her purpose wasn’t to jiggle across the screen, either as an empty headed blonde (think Chrissy on Three’s Company) or in a ridiculous attempt to stop the bad guys while wearing short shorts and stilettos (think Jill on Charlie’s Angels). Murphy Brown, played by Candice Bergen, was both brilliant and human—Mary Richards’ character from The Mary Tyler Moore Show with an eighties edge. Women loved her, and men, well, I think she intimidated a few, including Vice President Quayle, who likely was angry because the show included a joke about him in every episode (he provided plenty of material). 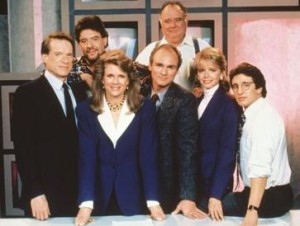 Little did Diane know that the show would set off a political firestorm regarding single mothers when Murphy Brown discovered she was pregnant and opted to have the child on her own. The day after the episode of the child’s birth aired, Dan Quayle gave a family values speech in which he invoked the TV show: “It doesn’t help matters when primetime TV has Murphy Brown, a character who supposedly epitomizes today’s intelligent, highly paid professional woman, mocking the importance of fathers by bearing a child alone and calling it just another lifestyle choice” (livefromthetrail.com).

When asked to comment on his accusation, Diane did not hold back: “Asked at the time to comment, I said that if the vice president thought a woman was incapable of adequately raising a child without a father, he ought to make sure that abortion remained safe and legal. That was the tipping point in a debate that raged on throughout the summer, pitting liberal ideas of an ever-evolving notion of family against the traditional concept of mom, dad and 2.5 kids. Whenever President Bush appeared before the media, he was asked about Murphy Brown’s baby. Quayle was boxed in by his own anti-choice views. Why condemn Murphy for having the baby? What was her alternative? Abortion? Women who loved and identified with Murphy could feel the disingenuousness. Family values? Whose family were they talking about? Why was the whitest man in America lecturing black people on the disintegration of the family unit when half of all white marriages were failing? Why did his speech not address the underlying issues of poverty, lack of opportunity and underfunded schools? Why was the GOP waging an unrelenting attack on organizations like Planned Parenthood that tried to prevent unplanned pregnancies in the first place?” (latimes.com). Well, we all know how the presidential election of 1992 turned out.

Diane’s work on Murphy Brown led to an Emmy for Outstanding Writing in a Comedy Series and two others for Outstanding Comedy Series (makers.com). She has also been honored with two Writers Guild of America Awards, a Genie Award from American Women in Radio and Television, a Freedom-to-Write-Award from PEN Center USA West, and the Commissioners’ Awards from the National Commission on Working Women for her positive portrayal of working women on television (makers.com).

She and her husband formed their own production company, and in 2008, Diane realized a 14-year dream when she produced the film The Women. She wrote the screenplay and directed the film, based on the 1930s comedy by Claire Boothe Luce. The 2008 version included Hollywood stars Meg Ryan, Annette Bening, Eva Mendes, Debra Messing, Jada Pinkett Smith, Bette Midler, Candice Bergen, Carrie Fisher, Cloris Leachman, and others. While the film was widely panned by critics, Diane felt she accomplished what she had set out to do: “I was determined to get The Women done because I wanted to see our great A-list actresses working together as an ensemble—the way they did in the original 1939 version. I was told over and over that it could never be done. But we did it” (imdb.com).

D is for Diane English, an American screenwriter, producer and director who believes a woman’s point of view matters.

We Are One Woman